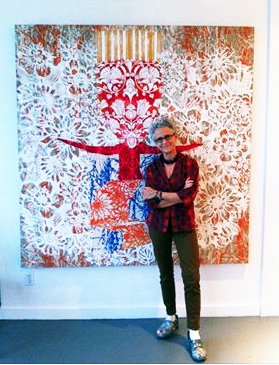 Jessica Weiss is a native New Yorker who received her BA from Oberlin College and studied at the New York Studio School in the mid 1970s. Always interested in texture and color she happened upon wallpaper in the early 80’s and has been collaging these scraps of domestic culture for their optical and psychological power ever since, combining pieces wallpaper with silkscreened patterns, fabric and paint.

The artist (who received a National Endowment for the Arts' Fellowship in Painting in 1989) has had solo exhibitions at Outlet Fine Art (Bushwick, Brooklyn), A. M. Richard Fine Art (Brooklyn) and Nicole Klagsbrun Gallery (New York City), and her work has been reviewed in The New York Times, Art in America, TimeOut NY, The Baltimore Sun, and the New York Observer. Weiss has appeared in numerous group exhibitions including "Two Friends and So On" at Andrew Kreps, "Seaworthy" at Edward Thorpe, "Three Degrees of Separation" at Sonnabend Gallery, and "The Stroke" (selected by Elizabeth Murray) at Exit Art. A recent painting was acquired by the Allen Memorial Art Museum at Oberlin College.
Loading...